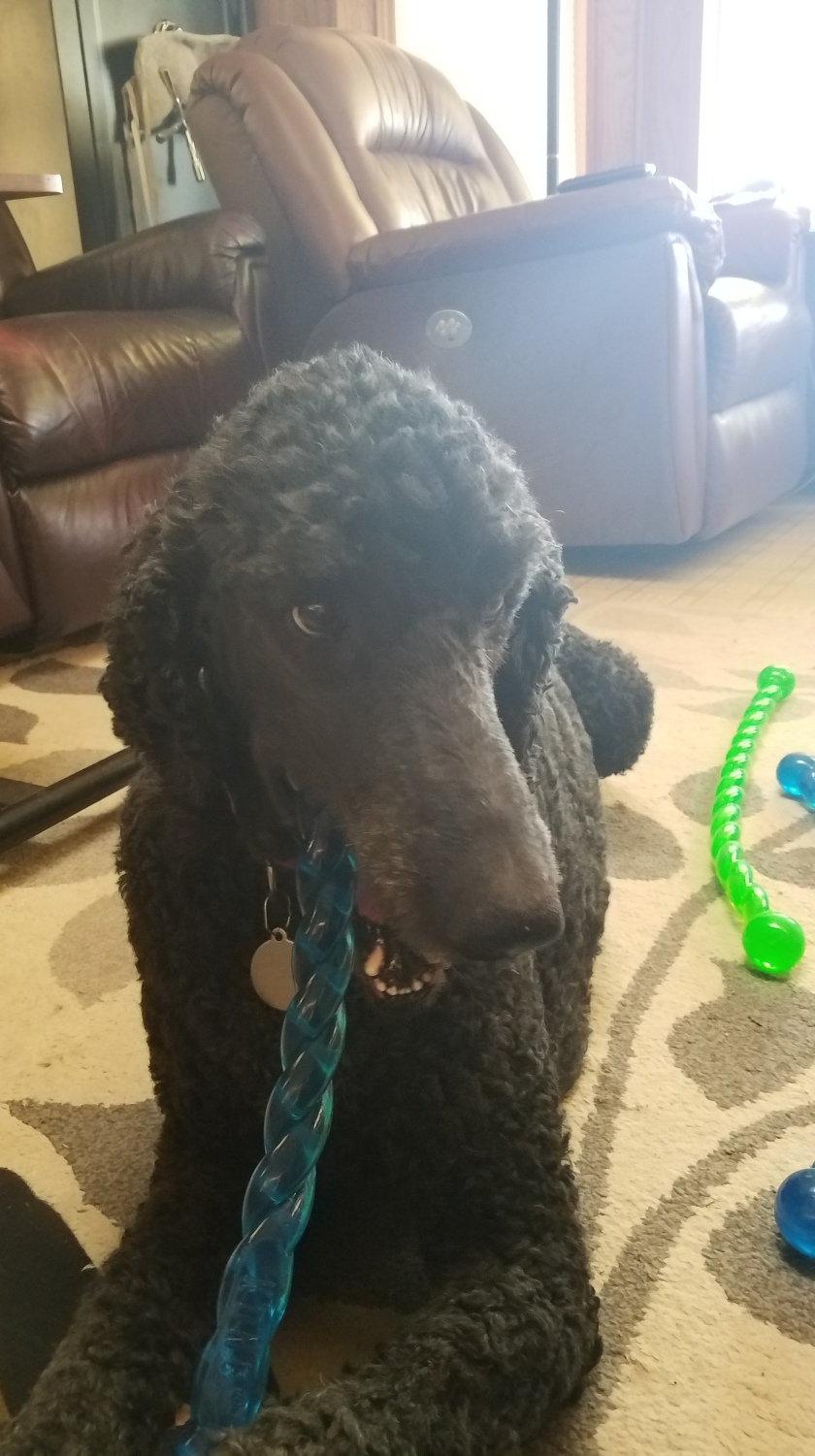 Hello friends!
Joe got some fun mail today, and he’s incredibly excited about it. See, ever since he was a puppy Joe has loved toys, especially Kong safestix, but he’s hard on toys because he’s an aggressive chewer. I try really hard to make sure about the time the latest toy needs to be replaced, we have new Stix in the wings.
But I sometimes miss the mark and we have to remove the old toy before the new ones arrive. This exact phenomena is why Joe has gotten really used to the Chewy signature blue box (not sponsored, just the only place I can easily get a hold of his favorite Stix).
This crazy dog recognizes the box from the moment the driver pulls it out and waits not quite so patiently at the counter as I cut all the non-dog friendly packaging away. Then one by one (I usually order three or four, in some combination of medium and large sizes for my giant teddy bear of a dog) I hand them to him, and he goes about showing anyone nearby his new treasures. The only downside to this is, thanks to the size of the Stix, if you are standing nearby, you should wear kneepads because he has no concept that he is suddenly a wide load.

After he’s taken his new Stix, one by one from the box, around the house to show everybody, and finally over to the living room (the most wide open space and thus the best for playing), I get a happy dog tackle hug. Without fail, he hugs and cuddled until I relent, and we are sitting on the floor while he chews, shows off, and inspect the new toys. Sometimes he will hand his Stix off to me or anyone else who’s joined us on the floor so we can play too. But pretty soon he’ll need it back for chewing purposes.
The rest of the work day I get more than my share of the steps in because anytime I sit down to work at my desk for more than 20 minutes, Joe comes in and begs for more play time, and who am I to say no. He loves his toys so much.
Scooby liked toys a little when he was younger, but he has always been more of a zoomies kinda dog, enjoying playing tag with us and other dogs over playing with toys, I think because his big brother, my childhood pupper Winchester, was the king of human vs dog tag matches.
Watson (and Sherlock, sweet little guy) were never as into toys, I think in large part because toys generally aren’t made for their size and if they are we would have to monitor so Joe didn’t eat them. Sherlock did enjoy the occasional rope toy, but his favorite thing was crawling up into the toy box and falling asleep. I have some cute video on my old SD of him quietly puzzling through how to crawl up into the bucket and promptly laying down (before looking up, seeing his mom filming, and diving for my lap). I’ll have to see if I can easily get to that SD.

Editing Amanda here: could not get into the box with the SD, it’s in the rafters of the shed and needs more hands than I have)

Weve had some crazy repairs to make on the flatbed, and we realized that, at some point in the future, were gonna have to tear apart that engine in the name of actual preventative maintenance.
Looks like whoever owned it before us had a penchant for breaking the heads off bolts and then completely ignoring the problem so that weather and leaks and such could get in there and make triply sure those bolts would never move again. It’s an effective technique that means that teardown for cleaning is a pretty lofty goal at the moment.

We finally were able to find a small, reasonably priced generator for the farm. It’s not a whole home backup, which is still on my “wants” list for the property eventually, but it’s a lovely little portable generator that will pull double duties on farm chores as well as whenever we do have a power outage and need a little emergency power to run the pump or fridge temporarily.
Dad was quite excited because it means he now how power anywhere on the farm he needs it, which has been an ongoing issue for a while. The way our farm is laid out, all the outbuildings are congregated on one side, which is perfect about 90% of the time, but not great when you realize two thirds of the farm doesn’t have outlets so things like electric chainsaws and weedwhackers and things become a problem. Since we have lots of fence lines that collect scrub trees and tumbleweeds like they are Pokémon, a generator to run those things and keep the fire risk down is a must. Clean fence lines can function as a small-scale fire break.
That’s about it for now, lots of new “toys” on the farm this week.
Until we chat again my friends

Hi! I’m Amanda, you can call me Manders if you’d like, lots of people do! I live on about 6 acres in the middle of rural Idaho! I’m a small town girl, software engineer, part-time farmer and full time critter keeper. I’ve also just decided I’m a blogger, so… ya know.
I’m very blessed to live in a beautiful place surrounded by family, faith, and farm life, and I’m learning all about how to care for all these things. I’m not always doing it right, but I’m trying my best and having a blast, so stick around with me and we can figure it all out together!